Community Works and The Platform are hosting an event on setting up a social enterprise, this Thursday (30th November) 10am – 1pm.

This session will enable you to explore what it means to be a social enterprise and support you to make an informed choice as to whether this approach is right for your organisation. There will be a Q&A with social enterprises Foodini Club and award-winning Here, long with Rebecca Luff, Award Manager at UnLtd and Social Enterprise specialist adviser, Mark MacTaggart.

Whether you are an established organisation or starting a social venture, this workshop will enable you to:

The event is free, but you need to register at http://www.theplatform.org.uk/event/social-enterprise-right-approach-organisation/

On 7 December,  1-3pm at the Brighthelm Centre, Brighton & Hove Council will be holding an information session for charities and community groups with Sussex Community Foundation.   This will be a great opportunity to find out more about the funding available from Sussex Community Foundation, as well as guidance and tips for applicants.   There will also be a presentation on “what funders are looking for” which will be of use for funding applications in general.  The sessions will cover

This session is particularly aimed at community groups working on topics which tackle hatred and prejudice; which build sense of belonging and community cohesion; and building community resilience.

There are a set number of places available, to book a space please email melinda.king@brighton-hove.gcsx.gov.uk

Brighton Soup – deadline for applying to next event

At the last Brighton Soup community funding event at St Luke’s in September, Stephanie Lake from Brighton Women’s Centre was awarded £383.30 in donations to update the IT equipment at their drop-in centre.

If you’re interested in pitching for funding at the next event, the submission deadline is Tuesday 14th November.

Free tours of the Amex stadium

Speak Up Against Cancer, Albion in the Community’s cancer awareness programme are offering FREE tours of the fantastic American Express Community Stadium and museum.  This invitation is extended to anyone over the age of 18,  living in Brighton and Hove and has not done one of our free tours before.

Speak Up Against Cancer will be combining the tour with a short workshop with some positive messages about spotting the signs and symptoms of early cancer and what to do next.  The tour and session will last approximately 2 hours.  There is parking available at the stadium and it is very easy to access by train, as the stadium is next to Falmer station.  There are also buses that run regularly to Falmer from around the city http://www.buses.co.uk/..

Please call 01273 878269 to book your place or email speakup@albioninthecommunity.org.uk.

Members of Community Works are invided to their next member’s conference on Thursday 9 November 2017, which is themed around ensuring sustainability and financial robustness.

In addition to the sessions detailed above there will also be a welcome presentation and keynote speech from a representative from The Information Commissioner’s Office between 9.45 and 10.50. The keynote will present an overview of General Data Protection Regulation, talk about what community & voluntary sector organisations should be doing now and in the future, highlight the responsibilities of staff, trustees and volunteers and signpost to available support and resources.

A networking lunch and marketplace will take place between 13.00 – 14.00. This is an opportunity to network and meet a range of support organisations.

A full programme with session descriptions and details on how to secure your place is available on the Community Works website.

For more information, assistance with booking or for accessibility get in touch with Community Works on info@bhcommunityworks.org.uk  or 01273 234023.

Brighton & Hove City Council are offering TAKEPART Golden Ticket vouchers. The voucher will allow people to take part in a free activity with any of the organisations supporting the scheme between 17 June and 30 September 2017. To register, apply online.

If you need support please contact the Healthy Lifestyles Team on 01273 294589 or email healthylifestyles@brighton-hove.gov.uk

Sussex Clubs for Young People are working with the University of Brighton to provide a conference with “nuggets” of training opportunities that will support your whole youth club. It won’t just be about safeguarding and youth work training, but a chance to meet with others to have fun, with just a little bit of Swedish Disco Dancing. Their idea is that for their Spring Conference on Saturday 22nd April 2017 your committee chair, treasurer, safeguarding officer, youth worker and young volunteers will come together to take part in a range of bite-sized courses and seminars to help you fund-raise, manage your club and develop your staff and volunteer team. It will also put you in touch with people who can offer more advice and training if you want to take your learning further.

Cost for the day £10 per person (£5 for young people) as a contribution towards food and refreshments. They will send an invoice for all spaces reserved.  Please contact Sussex Clubs for Young People for help with transport or the cost of the event.

To register, please go to

Now the days are getting longer, why not plan an active challenge for the spring – and raise some money for the Resource Centre at the same time? The Mayor of Brighton & Hove is organising three fantastic events in April:

The Platform have organised a workshop looking at legal structures for social enterprises:

Whether you are thinking about launching a trading arm, starting up a new organisation entirely or want to review your current structure, this interactive session gives you the chance to ask questions specific to your situation and leave feeling confident on what form is right for YOU! 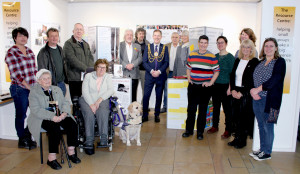 Our exhibition, which celebrates our 40 year history supporting small local groups, is now on display at the Jubilee Library.

It was launched by the Mayor of Brighton & Hove Cllr Pete West on 16th January, and will remain open until 4pm on 22nd January. The Mayor said ” I’m a big fan of the quiet, cooperative work the Resource Centre does, and proud to have them as one of my mayoral charities. I doubt we would have such an extensive and successful community sector in the city were it not for this organisation, it is an unsung hero, and I’m very glad to be able to help to celebrate and thank them for what they do”.

Kate Page, who has worked at the centre since 1982, said “Small groups create support networks and give people a sense of belonging, which cannot be matched by any top-down large organisation. For example, a street party run by a group of neighbours is much more than just a day’s entertainment. It gives people a sense of pride in their neighbourhood, and a feeling of achievement at having organised an event for their families to enjoy. It also helps residents build friendships with one another, which reduces isolation.”

Beryl Tucknott, a trustee, has been using the Resource Centre for 25 years.

She said: “I first came to the Resource Centre in 1991, when we set up Robert Lodge Tenants Association with the help of Mary Mears. Tenants didn’t have a voice, and we set up the Association to represent tenants’ interests. We managed to get community rooms and a laundry. The Resource Centre helped us with minute taking, bookkeeping and publicity. We wouldn’t have been able to set up the association without them.”

A big thank you to the Mayor Cllr. Pete West, Cllr. Leo Littman, Cllr. Dee Simson, Cllr. Mary Mears and Cllr. David Gibson, and to the Resource Centre trustees, for attending the launch to celebrate the work of the Centre.

We use some essential cookies to make our website work properly. We also use Google Analytics cookies to get anonymous information about how the site is being used. This helps us to report to our funders. To find out more, see  our Privacy notice for website users.